Joining Africa: From Anthills to Asmara –A Review

Dr. Samuel Mahaffy, Senior Advisor to Salaam Urban Village Association reviews the book Joining Africa: From Anthills to Asmara.  This review was originally published on his website in a longer form at http://samuelmahaffy.com/2014/10/joining-africa-anthills-asmara/ 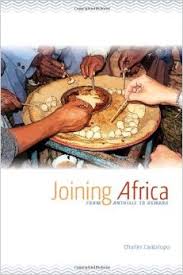 From a Western world that is fearing Africa, exploiting Africa, or begrudgingly discovering Africa, Charles Cantalupo brings forward with poetic wisdom a call for joining Africa. This work defies the predominant discourse on Africa as The Dark Continent. Joining Africa unpacks a relationship with a continent and its diverse peoples and cultures that presumes separation and superiority and is built on subliminal ignorance.

Ebola and terrorism has been the sad wake-up call that engagement with Africa is no longer the province of development experts, NGOs, anthropologists and linguists. Sadly, the focus on Ebola and terrorism evokes deepening of stereotypes and fears about Africa. In this context, Joining Africa moves from poetry to prophetic wisdom. Africa is our no longer invisible neighbor. Joining Africa is a compelling work for our times.

Joining Africa proposes nothing less than a profound paradigm shift and a relational redefinition. As such, it is essential reading for anyone who has an interest in international relationships, global health and geo-political issues or even curiosity about the mystery of a continent that is the very birthplace of human civilization.

We, in the West, have co-created the Africa we are presented with in Western media today. Arguably, Ebola and extremism on the African continent are in part a product of our own indifference, ignorance and exploitation of our African neighbors. Centuries of devaluing the cultures, people and indigenous wisdom of countries to which we have sought to export our values in exchange for importing their natural resources have come back to haunt us.

It is never too late to repair a relationship. Joining Africa presents a clear roadmap for re-imagining a relationship with a continent and restoring a way of being respectful of our neighbor in an international context.

But, Joining Africa is quintessentially not a call to the intellect. It is a call to the heart. Charles Cantalupo calls us to journey with him to the place where we drop our baggage because “my bags became too heavy for my beliefs.” (p. 7). This work invites us to “go a little further” and to travel as a pilgrim (p. 89) partaking in a “different kind of communion” (p. 91). Accepting the invitation of this exquisite work, we will follow the sound of drumming to discover the richness not only of the African continent, but the richness that is within ourselves. Joining Africa ultimately shares the richness of what it means to be human, co-creating our universe in relationship.

While he is a writer with a keen intellect and deep insight, Charles Cantalupo is first of all a poet. Joining Africa calls to the poet within each of us. It reaches into the crevices of the heart where we appreciate beauty and the sacredness of our shared journey to discovering what it means to be human.

I am enchanted by the journey of Joining Africa ending in Asmara, Eritrea. My bias is that Asmara is the city of my birth. The charm of Eritrea is beautifully articulated in this work through the authors engagement with the great poets of Eritrea and the conference in Asmara that highlighted to the world, for the first time, the rich literary traditions of authors from across Africa.

My friend, Issayas Tesfamariam, articulates that Eritrea is an attitude as much as a country. Charles Cantalupo betrays the soul of an Eritrean in his search in Africa for discovering his European roots. The celebration of his wedding in a straw-filled building reminds me of many weddings I have attended in Senafe, Eritrea, where I grew up. Indeed, the cover picture of this book is of a wedding feast in Senafe.

When I review books of significance, I typically mark them up with margin notations and yellow highlighting. Joining Africa is a book of beauty that defies the desecration of margin markings. The publisher, Michigan State University Press, wisely allows the cover picture of a community eating from a common dish at an Eritrean wedding to stand alone in its beauty. In the village of Senafe, where I grew up, we would have held such a book with tenderness and appreciation, perhaps wrapping it in cloth to preserve it from discoloring under the hot African sun. Joining Africa is indeed a book to be treasured and to be shared as the shared African feast depicted on its cover.

Joining Africa: From Anthills to Asmara is available from Amazon at http://www.amazon.com/dp/1611860369/ref=rdr_ext_sb_pi_hist_1

← South Sudan: Tragedy and Tentative Hope: Learning from the Story of One of the ‘Lost Boys’ of Sudan
The Future of Burkina Faso →